Civil Rights history in Virginia has a complicated legacy. As the home of the capital of the Confederacy, it’s arguable that Virginia was the center of some of the hardest fought battles during the Civil Rights Movement. In fact, it was in Virginia that the National Association for the Advancement of Colored People (NAACP) filed more lawsuits than in any other state, hence many of the most important legal landmarks of the civil rights movement originated here. Irene Morgan brought the suit that desegregated interstate bus travel in 1946. The case of Dorothy Davis v. County School Board of Prince Edward became part of the foundation for the landmark Brown vs. Board of Education Supreme Court case. Southern juries were desegregated as a result of Johnson v. Virginia in 1963, and Richard Perry Loving’s case resulted in the overturning of seventeen states’ laws banning interracial marriage.

While some of these history-making and culture-shifting moments are honored on the U.S. Civil Rights Trail, we’ve found a few more sites to explore on your next journey through Virginia’s quest for racial equality and justice.

Built in 1939, Robert Russa Moton High School was one of the few all-black schools in Prince Edward County Virginia. The one-story brick building was immensely overpopulated, and lacked a gym, cafeteria and even a single microscope for science classes. Inequalities between the facilities at Moton High School and white schools in the county were so stark that in April 1951, one student decided to take action. 16-year-old Barbara Johns convinced her fellow students to walk out in protest of the schools ’ poor conditions, and eventually they teamed up with the NAACP to work to integrate Price Edward County schools through the courts.

Although the Virginia state court rejected the lawsuit, the verdict was appealed to the U.S. Supreme Court where it was combined with the landmark 1954 Brown v. Board of Education of Topeka case that declared racial segregation in public schools as unconstitutional. In response, the Commonwealth of Virginia led the “massive resistance” movement against the Supreme Court decision by threatening to close its public schools. Schools in Prince Edward County closed from 1959 to 1964, making it the only county in the United States to close its public schools for an extended period to avoid integration. Finally by 1964, the Supreme Court in Griffin v. Prince Edward ordered schools to reopen. Today, Moton High School is a National Historic Landmark and museum, and a civil rights training ground.

Admission is free to the Robert Russa Moton Museum, which is open 12-4pm Monday through Saturday as well as by appointment.

Find More To Do While Visiting Farmville

Built in 1905, The St. Luke and Odd Fellows Hall is the only building remaining from New Town, a historic African-American community in Blacksburg that thrived until the late 1960s. As the only place African Americans were allowed to congregate outside of local churches, St. Luke and Odd Fellows Hall was the centerpiece of social gatherings, including dinners, dances, fashion shows, bingo parties, mock weddings, Easter egg hunts, ball games, and a host of other weekly activities. Now a museum, the lodge highlights the significant contributions of African Americans to the town of Blacksburg through an exhibit titled “From Civil War to Civil Rights”.

The museum is free and open to the public by appointment, and in 2005 the hall was placed on the Virginia Landmarks Register and the National Register of Historic Places.

Find More To Do While Visiting Blacksburg 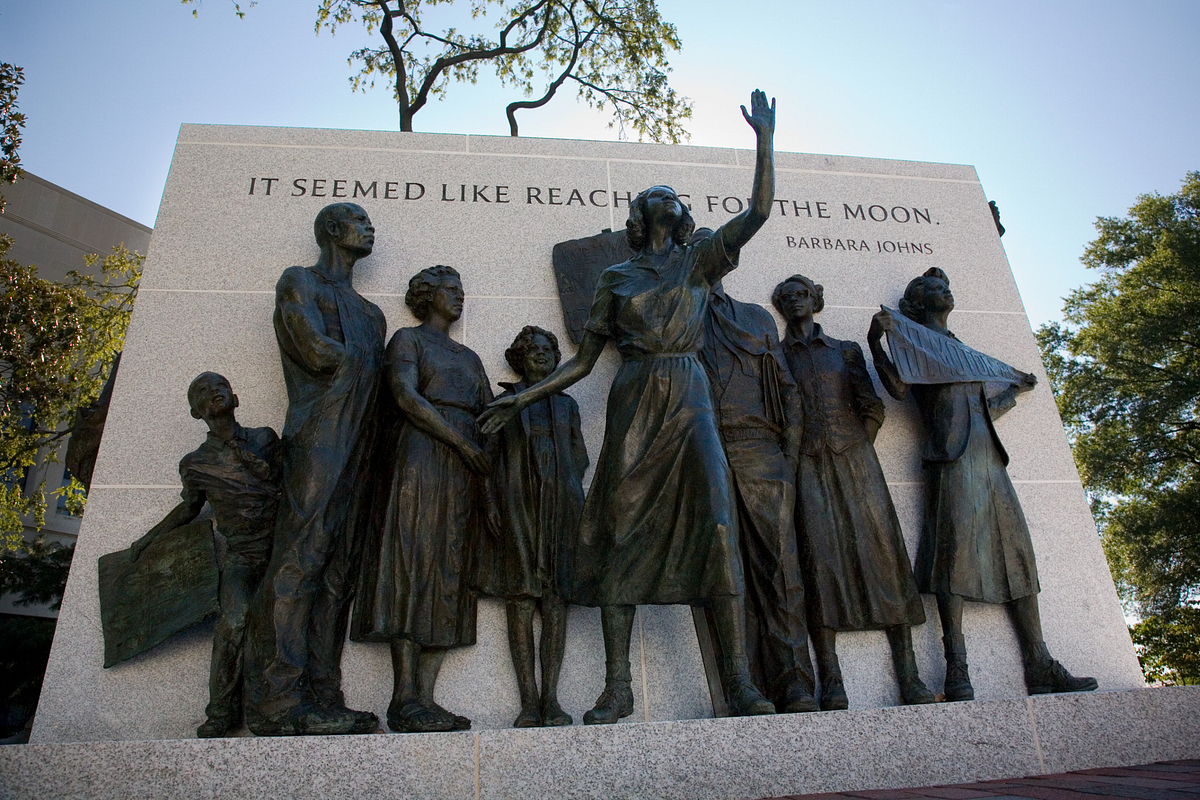 On July 21, 2008, Governor Timothy M. Kaine unveiled the Virginia Civil Rights Memorial on the grounds of the Virginia State Capitol. Created by internationally known artist, Stanley Bleifeld, the memorial spotlights the African-American students and activists that led the fight for public school integration in Virginia, with 16-year-old Barbara Johns at the center.

She and John Arthur Stokes led a school strike in 1951 to protest poor conditions at Robert Russa Moton High School in Farmville, and her statement that the fight for integration was “like reaching for the moon” is portrayed in the memorial. Also in the memorial is Oliver W. Hill Sr., holding a rumpled legal brief over his head as he stands next to law partner Spottswood W. Robinson III; the two men filed the lawsuit against segregation in Prince Edward County public schools.  Reverend L. Francis Griffin , a Prince Edward County civil rights activist known as the “Fighting Preacher”, who supported and encouraged the students and their parents, is also featured.

The Virginia Civil Rights Memorial is on public grounds and can be visited free of charge during the hours of 6am-11pm.

Find More To Do While Visiting Richmond

Did you know that the earliest known civil rights sit-in occurred in Alexandria? On August 21, 1939, African-American attorney Samuel Tucker, a native Alexandrian, organized a group of five fellow African-American men to visit the all-white Barrett Branch of the Alexandria Library to apply for library cards. One after another they were denied, but instead of leaving the facility, they sat down with a book and began to read. They were arrested for civil disobedience and charges were eventually dropped, and the Robert Robinson Library was built in 1940 as the first public library built exclusively for African Americans in Alexandria. Although Robinson Library was built as a way of forestalling integration, the peaceful protest is still seen as a blueprint for future peaceful protests of the Civil Rights Movement.

Now known as the Kate Waller Barrett Branch Library on Queen Street, Alexandria, you can visit the library during select hours seven days a week.

Erected by the Tinner Hill Heritage Foundation in 1999, a fifteen-foot pink granite Roman archway honors the men and women of the historic Tinner Hill neighborhood, founders of the Falls Church  chapter of the NAACP and the organization’s first rural chapter in the United States. African-American couple Charles and Mary Tinner purchased land in the area in the late 1800s, and their son Joseph Tinner was a skilled stonemason and a member of the Washington NAACP. In 1915, Joseph Tinner and Dr. Edwin B Henderson organized the Colored Citizens Protective League in response to a Falls Church town ordinance mandating residential racial segregation. Henderson, Tinner, and seven other African-American citizens began a letter-writing campaign and filed a lawsuit against the city, successfully blocking the enforcement of the ordinance. As a result of their work, Dr. Henderson requested a charter for a Falls Church branch of the NAACP, where Joseph Tinner served as the first president and Henderson as the secretary. The Falls Church chapter fought for public utilities (1928), a larger, more modern elementary school (1947), door-to-door postal service (1949), public sanitary sewers and water (1955), and street lights (1968). The Falls Church NAACP also helped organized other rural branches in Arlington, Fauquier, Prince William, and Loudoun counties.

The design of the monument by local artist John Ballou honors Joseph Tinner’s stone masonry and the pink granite he mined at the base of the hill on his family’s farm on Tinner Hill. Surrounding the arch are original uncut Tinner quarry stones. A plaque is placed on each stone that tells the story of the civil rights struggle and the makers of the arch.

The Tinner Hill Monument is on public grounds and can be visited free of charge at any time.

Find More To Do While Visiting Northern Virginia

Looking for more notable Civil Rights’ destinations in Virginia to visit? There are dozens of historic sites located in every corner of the Commonwealth that tell the stories of incredible black Virginians; learn more and make plans to visit them today!